To be fair, this wasn’t as bad as Fyre Festival.

But, there was a fire, literally.

Sparked in a restricted area to attendees, the fire was thought to be due to fireworks that had recently stopped. Luckily no one was hurt except a poor, engulfed palm tree.

“Ultra will not launch fireworks for the remainder of the festival”, Miami Commissioner Ken Russell  said, whose district includes Virginia Key.

Thousands of people without transportation and #ultra2019 is on fire https://t.co/zg29gJVmdt pic.twitter.com/VtywqZW0G6

Sadly, the fire was the least of Ultra’s problems. Logistical mistakes must have been made when predicting the exit of over over 150,000 patrons, because most ended up walking over 4 miles from an island off the coast of Miami to hail an Uber.

The setup for Virginia Key was to have it be an Uber and Taxi restricted area, with shuttles going back and forth on Rickenbacker Causeway from the island to Florida and have people hail rides from there.

Instead, people ended up walking this entire causeway due to a two+ hour long line for the 55-person shuttle busses that were barely making a dent.

I can already see reaction from #Ultra2019. Fire Festival part 2. New venue is crazy MAJOR ISSUES getting off the island. Thousands are stranded. pic.twitter.com/hUCyzObb8D

With the traffic jamming from people walking through the streets, ambiguous directions from festival staff, and an angry energy circulating; this was a nightmare, to say the least. Some attendees didn’t get back home until after sunrise, when the festival started back up at 2PM the next day.

VIP members who paid $1,500 a ticket were lucky enough to have a boat ride included in their ticket, and some attendees even took advantage of the limited $150 ferry leaving the island. This felt like the only way off the island, for some.

Ultra’s officials had this to say:

Luckily, the internet is already doing what it does best, and is making a joke out of it. Some are deeming their experience as the “Ultra 5K” and “Ultra Fyre Fest”. Most patrons are expected to return for day 2, with serious revisions being taken into account. 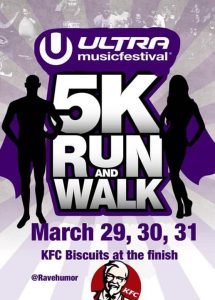 I think the exponential increase of 150,000+ people wanting to get in a shuttle bus and an Uber at the same time (2AM, when the festival was over) was something Ultra was unprepared for. Having better communication to guests and a pickup point inside the festival would have taken a lot off their hands.

What do you guys think the ultimate mistake was? How could they have done better?

Hey! I'm Katy and I'm from Madison, Wisconsin. I enjoy long walks on the beach and bass in my face. I LOVE all genres of EDM and will rave to my grave.

Ignore The Critics, Netflix’s New ‘Turn Up Charlie’ is Rave-Worthy