The first single “Sunday Driver,” is a no-nonsense track that lets everyone know The Raconteurs are back with the same rock and roll attitude they used in their last album, Consolers of the Lonely.  It’s a simple song with simple lyrics. The chorus wails:

“Ain’t it right/Ain’t it wrong. It’s a fact/Sing my song”

Nothing flashy, but ain’t nothing wrong with that. 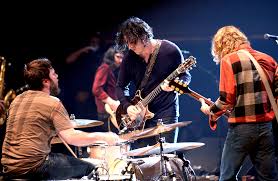 “Now That You’re Gone” brings the pain as White sings to an ex-lover who’s moved on all too quickly. White’s guitar screeches woeful tones as he asks:

“Who’s gonna keep you warm/Out there in the cold. Who’s gonna rescue you/When you’re lost at sea. And who’s gonna love you/If it isn’t me”

The Raconteurs, made up of Brendan Benson, Jack Lawrence, Patrick Keeler, and Jack White, are one of White’s many projects outside of his other band, The White Stripes and his solo career.

Third Man Records announced the new album in an October tweet. The album will be the first full-length to come from The Raconteurs in more than a decade. The label also announced a re-issue of 2008’s Consolers of the Lonely, an olde-time, swaggering rock and roll album. The reissue is said to include two songs from the upcoming album, which has not yet been titled.

Looking for more from White and The Raconteurs? White’s label Third Man Records has created a quarterly Vault subscription series.

The latest addition to the series will be the reissued Consolers of the Lonely pressed on copper foil metallic vinyl, marking the first time the double LP has been available on colored vinyl. You’ll also get a separate 7-inch record that contains the two new songs, pressed on mixed metal vinyl.

White recently finished a lengthy world tour for his latest solo album Boarding House Reach. The musician recently donated $30,000 to preserve the house of the main characters in The Outsiders.

Check out “Sunday Driver” and “Now That You’re Gone”  below.

Chance the Rapper Is Bringing Back an Old Favorite