On the second of their two night show in Chicago, Dave Matthews Band delivered an explosive set in front of the city skyline at Northerly Island’s Huntington Bank Pavilion.

As the sun set on Saturday June 30, the heat drenched crowd warded off the sun with their excitement of the show to come. From the pit to the pavilion to the newly converted Astroturf lawn longtime fans and first time attendees mixed and mingled in true DMB fashion.

As soon as the sun dipped below the buildings the group took the stage, opening with a track off of their newly released album Come Tomorrow: That Girl Is You. From there, Dave and the rest of the band weaved through fan favorites and recent releases finding a perfect balance of old and new.

A lengthy, almost 20 minutes, Seek Up showcased the musicians in fine form. 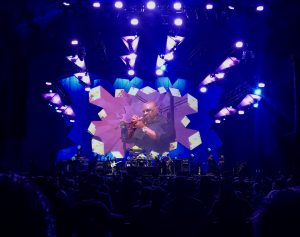 The romantic and transcendent trumpet riffs from Rashawn Ross throughout the show were a definite highlight, as was Carter Beauford’s drumming on the soon to be class Idea Of You.

Live show classic, Gravedigger followed by, Warehouse, proved that after 9 studio albums the jam band is still filled to the brim with rhythm.

The encore closer of, Stay (Wasting Time), with it’s laid back groove, got the entranced crowd dancing one last time. A perfect end to the weekend and a perfect start to 4th of July festivities.

To Rothbury We Go, to Lose Our Minds and Find Our Souls - Electric Forest 2018 Review & Photos

Stream Your Favorite Artists and Festivals From Home