On Wednesday, June 27th, I sat down with Ben Arguelles, creator of DZ Records, to talk about this year’s DZ Fest, his record label, and how he turned his music festival pipe dream into reality.

“I’m so bad with this stuff.” Arguelles musses, clicking away at his Apple computer. He’s on Instagram, trying to upload a trailer for this year’s DZ Fest, an indie music and arts festival held in his 1-acre backyard.

This year, the festival will span two days, with 40 bands playing on two stages built by Arguelles and volunteers. There will be an art display full of original crafts, paintings, and posters for sale to support working artists. Arguelles and other members of the volunteer staff will film, and record part of each band’s performance with professional camera equipment. The entire fest will be done with high quality audio equipment, all owned by Arguelles.

Ben Arguelles is the man behind the scenes at all things DZ. Since founding the label in 2010, he and his passion have come a long way. While the finer points of Instagram may prove tricky, Arguelles has a solid handle on audio production. Armed with a master’s degree in sound design from Chicago’s Art Institute, Arguelles produces a podcast called, Friends with Music, runs a recording studio out of his basement, and will be teaching in the Arts and Technology department at Illinois State University in the fall.

In 2007, Arguelles and his friends would often joke about one day hosting an awesome music festival in his yard. With plenty of open space between neighboring houses, they imagined a place where their friends would gather to enjoy great music. They’d call it DZ Fest after the DZ, a sort of, uber clubhouse that they had built in Arguelles’ backyard. More than four walls and a roof, the DZ has electricity, a working fireplace, and lofted beds for friends to crash on as needed. The idea behind the place was that everyone was welcome. It was a way to spend time with friends, without rules. Whenever someone wasn’t welcome at home, or allowed in the house, they’d park their bikes and boards in the yard, and hang out in the DZ. If you’re wondering, each time I’ve asked about the meaning behind the letters, I’ve gotten different answers. Whatever the literal meaning, Arguelles and friends spent countless hours in the structure, and the ideas of community and acceptance they agreed upon there would serve as the backbone of DZ Records.

“I had to lie to my parents.” He recalls. “For the first two years… They would go to a summer cottage in Indiana. I would tell them I’m just having a show in the garage.”

Arguelles’ parents came from large families and were accustomed to having many people in and out of the house. They were open to campouts, noisy sleepovers, and no stranger to crowded gatherings, as long as everyone followed house rules: Drinking and smoking kept to a minimum. This was as much a parental policy as it was an understood rule among those in the group.

Arguelles knew that something like DZ Records could only work if it was done responsibly with “level-headed, sober people.” While Arguelles’ parents were generally very welcoming, an unsupervised outdoor concert was not allowed. Arguelles, however, was not about to give up on his project. “I had to lie to my parents.” He recalls. “For the first two years… They would go to a summer cottage in Indiana. I would tell them I’m just having a show in the garage.”

Eventually, Arguelles’ parents moved out, leaving more space for him and his roommates to develop the DZ name. Although DZ Records could now come out of hiding, Arguelles still found little support from the adults in his life. “If you don’t have a job where a boss is paying you money, then you’re not working.” This was the mindset of Arguelles’ parents during the formative years of DZ Records. Like most people “over the age of 30,” Ben’s parents didn’t understand why he was doing this. Why would he spend his time hosting garage concerts and recording music for local bands instead of working a “real job”.

It was true though, that he was spending more money on DZ Fest than he earned from the suggested $10 donations at the door. Not to mention the high-cost equipment necessary for maintaining a podcast, monthly shows, and weekly video sessions.

“If you don’t have a job where a boss is paying you money, then you’re not working.”

Even after seven years, the fest still costs more to put on than it returns but Arguelles sees it as a long term investment. At 28, he has amassed a portfolio of recordings and productions that made it easy for him to secure his teaching position at ISU. Through DZ Records, Arguelles has also built a valuable network of musicians, artists, and producers. Of course, with great indie musical power, comes great responsibility.

Every year, Arguelles spends six months booking the bands, contacting the artists, and organizing the volunteers who will come together for one weekend to execute the final product.

From January to July, almost everything is orchestrated by Arguelles himself. Between the bands, food vendors, artists, police, “port-o-potty guys” and his own family, there are roughly 300 people with individual schedules that need to be accounted for by showtime. Needless to say, pursuing his dream has never been easy, but Arguelles has never thought of giving up.

“Every time I’ve felt discouraged, it flipped me and the inverse happened. ‘I’m gonna try harder now. I’m not gonna stop.’” While everyone around him scratched their heads, doubting his decisions, Arguelles earned his degrees and a teaching job, and continued improving DZ Records.

The coming months will see Arguelles busy as ever, putting hundreds of hours into his hobby, and his career, which happen to be the same thing. When others complain that “it’s too much work.” Arguelles asks what he would be doing instead. When the time will pass regardless of how you spend it, Arguelles insists on using it to get something accomplished.

While it’s up to Arguelles to orchestrate DZ productions behind the scenes, everyone comes together to execute the final product. DZ staff members are all volunteers. As per usual in the DIY concert community, the touring bands get a share of the revenue, the rest do not. Because most of the bands are not getting paid, Arguelles and his crew offer a professional video for each band to use freely for self promotion. A sound team, amps, drums, and monitors are all provided for the bands, luxuries often reserved for the highest caliber acts. “These bands…they don’t have an outlet. [at DZ Fest] they have a platform to show their work.”  Bands that typically play for crowds of ten people can come to DZ Fest to play for hundreds. Similarly, artists that rely on Instagram and Etsy to sell artwork can come and showcase their work for some 2,000 people over the course of a weekend for free. No sponsors, no advertisements, and most importantly, no corporate puppet masters.

“These bands…they don’t have an outlet. [At DZ Fest] They have a platform to show their work.”

Maintaining DZ’s grassroots, erm… roots is important to Arguelles. As the fest grows, he is careful not to let the event become chaotic. “I’ve heard horror stories,” he tells me, “of people who started a small thing like this…got super big…and just skyrocketed.” While reaching the big leagues might sound appealing, Arguelles warns that letting an event turn corporate, that is, become reliant on outside sponsorship and funding, can be the end of what made the show special in the first place. DZ Records aims to offer a platform for developing talent. The goal is to offer a place that feels comfortable, where the bands you’ve never heard of come to do what they love doing.

Bands interested in recording with DZ Records or playing at DZ Fest just need to have some recorded music available for listening, and be prepared enough to come together and play.

Ben Arguelles plays guitar in an experimental, progressive rock band called Afterglows. He loves both playing and producing music and you can listen to Afterglows on Bandcamp.

The trailer is published on Instagram first, then Youtube. Only a few minutes after the video goes up, friends are texting Arguelles to say that the video is cropped out of frame. Arguelles smiles to himself and puts away his phone, It’s going to take more than that to bring him down. 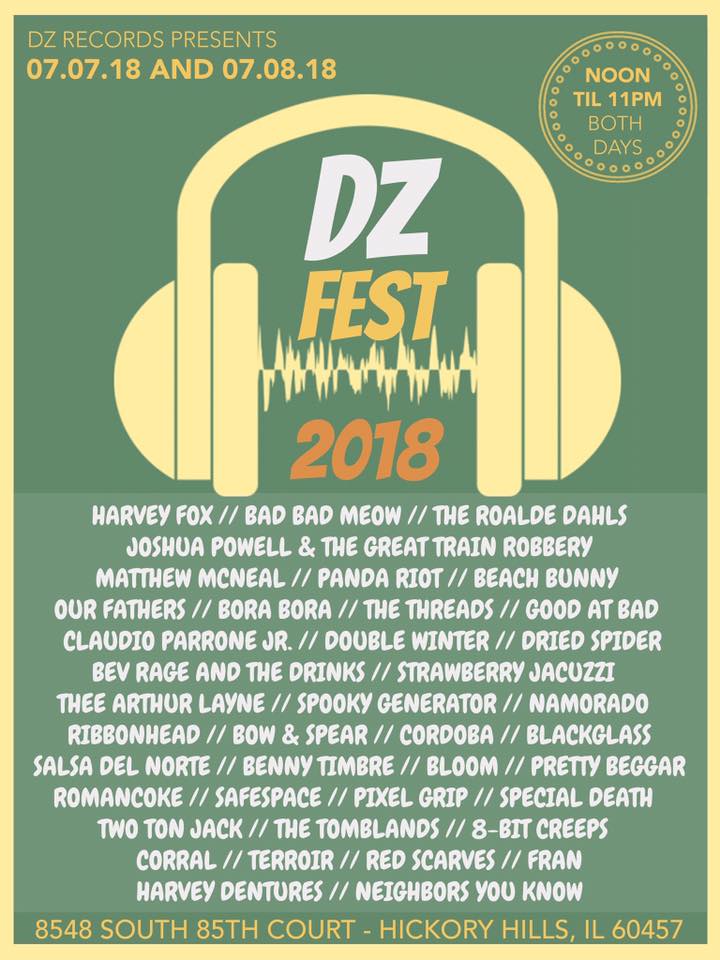 Get Ready for the World's First Adult Swim Festival