Is beautiful and innovative and charming and sensitive and caring and forthcoming and does it all so easily. She comes from an unsteady past and wears it on her sleeve. She is a misfits by nature, along with the rest of us. 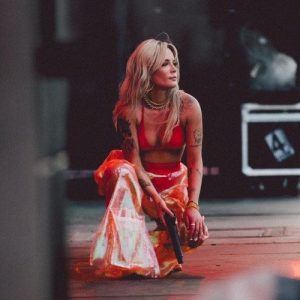 Born in New Jersey to working class parents, Ashley Nicolette Frangipane (Halsey), learned the streets at a young age. She took AP classes in high school and got into the prestigious Rhode Island School of Design. She did’t attend due to their price. She got into a subsidiary university and dropped out due to their lack of ability.

Halsey was in a relationship with a heroin addict and homeless when her break came. She had met a guy who new a guy at a hotel party. He owned a studio.

In that studio Halsey recorded “Ghost,” she released it on SoundCloud a few days later. Within hours the song blew up. Her twitter notifications were continuous and by 3 a.m. she had five contract offers. “Ghost” now has over 52 million plays on YouTube.

Halsey does not seek to represent the misfits. She is the misfit. She seeks to satisfy herself because she has never known satisfaction. At age 17, she attempted suicide.  She tried to overdose on painkillers.

After being hospitalized from the attempt she was diagnosed bipolar. Shortly thereafter her mother was diagnosed the same, she was put on lithium and hated it.  She told Rolling Stone that “lithium ruined my life.” 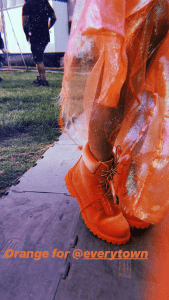 Halsey is a punk rocker. Although she makes pop music, she is punk. Her look is punk and her style is punk. She writes her own music and designs her own costumes. She customizes her own merchandise and does her own cover work. Reason being, avoid manipulated at-all-costs.

Punk is traditionally political, and within the political stem, She recently wore orange to her performance at the Governors Ball. Orange represents Gun Violence and an action to promote gun sense in America. With the numerous tragedies and the national attention she heeds, a message of reform was sent.

With this we gain momentum. It takes leaders like Halsey, and leaders like the members of Moms Demand Action for Gun Sense in America, along with Every town For Gun Safety to change a political stream. These two agencies adopted the orange for gun violence theme in the wake of the Hadiya Pendleton tragedy.

Learn more here and join the Moms Demand Action for Gun Sense in America with Every town for Gun Safety.

In the same vain as punk and gun violence, Halsey opened up her performance by powerfully enacting the members of the LBGTQ community and their supporters to get up and dance.

Notable quotes from the Rolling Stone interview by Alex Morris:

“I didn’t like being Ashley Frangipane,” she says. “It was a person I thought was weak and silly and sad.”

“I remember one time I had $9 in my bank account,” she says later, “and bought a four-pack of Red Bull and used it to stay up overnight over the course of two or three days, because it was less dangerous to not sleep than it was to sleep somewhere random and maybe get raped or kidnapped.”

Will Lamenting On The Past Save Death Cab For Cutie’s Future?

Gem And Jam Music Festival: Why You Should Make It Your Home