On Friday, May 25, a picture of an old Sony television, lying smashed on the ground appeared on Instagram.

A pair of dirty, pinkish socks-in-sandals stand idly by, toes pointed towards the shattered device. Until now, the official Instagram account of indie rock band, Vampire Weekend, had been dormant since 2013.

However, buzzy new images like this one are quickly decorating the band’s reinvigorated social media pages. 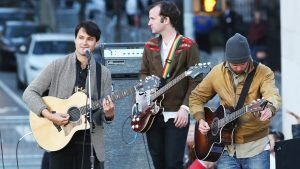 Front man, Ezra Koenig has revealed that the band’s upcoming album is nearly finished. He’s calling it Mitsubishi Macchiato. Koenig has described the album as, “a lil’ more springtime than the last one,” and ensured fans that, “guitar’s not dead.”  Last year, Koenig said the album was “80% done.” Now, the band estimates the album is at a painstaking 94.5 percent completed. Recently posted images included a fuzzy sweater, and a rear windshield sporting an Ojai sticker. Ojai, CA, a small city northwest of Los Angeles, is where the band will host an intimate concert over Father’s Day Weekend. Rumor has it, the New York City based artists will reveal some new music at the small town show.

On sale this Friday, June 1st at 10 AM PT. We’re playing two shows in Ojai this Father’s Day Weekend at the beautiful Libbey Bowl. One’s on Saturday night, the other’s Sunday morning. Probably worth catching both 😉. Richard Pictures (featuring Time Crisis’ Jake Longstreth for all the TC Heads) is opening at both shows. Tickets at vampireweekend.com 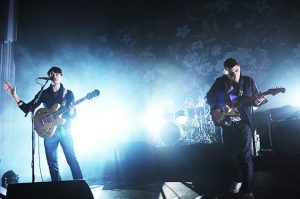 The forthcoming album is important for Vampire Weekend, as it will be the band’s first since 2013, Modern Vampires of the City. It is also the band’s first major recording since former keyboardist, Rostam Batmanglij left the band in 2016. Following the record that Rolling Stone named best album of 2013, Vampire Weekend’s next venture will have big shoes to fill.

Lots of LEDs in a Cube

grandson looks back on how far he has come

Why You Should Try Going to A Rave!