Indie darling, Chvrches is back with their third album and it once again meets their high expectations. 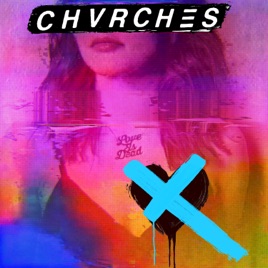 Their songs typically have a, vintage 80’s sound, but the group incorporates elements of indie pop as well as contemporary production to give it a modern spin. The instrumentals are overflowing with a sense of bliss and color.

Lead singer, Lauren Mayberry provides bright, youthful vocals that are incredibly straight to the point. Her voice is very pop-friendly, but it never comes off as overproduced.

The record comes off to a very strong start with the first two songs, “Grafitti” and, “Get Out.”

“Graffiti” pulls no punches as it drives straight into a kaleidoscopic storm. The synths gloriously crescendo in the background into a beautiful explosion. The instrumental is dense and Mayberry soars over it with her bright and straightforward delivery.

The following track, “Get Out,” is a catchy run of the mill song for Chvrches. While it is not a huge step out of bounds of their comfort zone, it is a highlight, regardless of Mayberry’s passionate delivery and the dazzling twinkling instrumental. There is a great deal of repetition on here as well as several other tracks, but it never comes to a fault. In fact, the group uses it to their advantage by making it ear-grabbing rather than annoying.

“My Enemy” is the first major misstep the group takes. With The National frontman, Matt Berninger taking on the verses, the collaboration is just so awkward that it should never have happened. Berninger’s deep voice sounds so out of place over this melodic and poppy instrumental. Not to mention the lyrics come off as so melodramatic that they are borderline laughable.

“Never Say Die” has a gargantuan EDM-like pre-chorus. The chorus is a little repetitive, but the pitch-shifted vocals that come in response after every refrain are actually super effective in the way they act as a partner to Mayberry’s voice.

The following track, “Miracle” features a similar EDM buildup. This one sounds particularly like something Zedd would have put on his last album. When the drop finally arrives, the producers put some sort of distortion on the vocals which sound pretty cheap, but that is not even the worst aspect of this song. On the hook is this alternative radio sing along chorus that sounds so bland and generic it is stomach churning.

I love the optimistic tone Mayberry emits in her lyrics on “Graves.” On the chorus she proudly addresses her commitment to various social causes. Accompanying the triumphant chorus are these dizzying synths that provide the perfect structure for the vocals.

“You can look away. While they’re dancing on our graves. But I will stop at nothing.” -Chvrches

Unfortunately, after the song “Heaven/Hell,” is where the album really begins to fall apart for me.

“God’s Plan” is not a cover of Drake’s recent smash single as I had hoped. Instead it is a boring piece of electro-pop, featuring one of the male members of the group, Martin Doherty as the main singer. The instrumentation is as equally dense as the majority of the track listing, but even it fails to support the lifeless and uninteresting vocal delivery.

What is objectively one of the most minimal tracks on the record, “Really Gone” is a slow-paced ballad that takes a left turn. It is not an awful song, but Mayberry’s voice is admittedly a little awkward. There is a subtle charm to it, however and I do enjoy the melody present throughout the track.

“ii” is a bizarre detour from the group’s signature sound lasting just over a minute and featuring a dark piano interlude. It does provide a decent transition into the final cut, “Wonderland,” although it is questionable whether or not it is truly necessary.

The album’s closer, “Wonderland” is an underwhelming ending to the album. There is not really anything special about it to justify its placement. For a song titled “Wonderland,” one would expect it to be full of fantasy and wonder, but instead it features one of the most unadventurous instrumental/chorus combinations on the record.

Overall, Love Is Dead reaches the same level of quality as Chvrches’ previous releases. There is an abundance of infectious, fun synthpop songs mixed with a few duds. The instrumentals are dense as ever and Mayberry sounds as poppy as usual.

Something I noticed that I had not seen on earlier albums is how impressive it is that the band is able to take simple, straightforward synthpop songs and stretch them out to four or five minutes without making them feel that long.

Henry is a third year journalism student at Colorado State University with a minor in French. Outside of school, he writes for the arts and culture section of the Rocky Mountain Collegian and he hosts a radio show for the school radio station, KCSU.