Bohemian Rhapsody is a Queen biopic film that is set to release this fall. Actor Rami Malek, famed for staring in the TV show Mr. Robot and Night at the Museum films, will play Freddie Mercury, the 1970s band’s lead singer.

Recently, 20th Century Fox released some new photos of Malek, and other actors as they don the personas of the classic rock legends. This has caused a lot of excitement from the bands fan base, as they’ve praised how accurately the actors resemble the members. 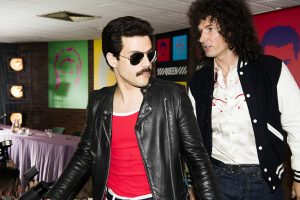 While fans may be anxiously anticipating the film, Malek is feeling a bit of pressure.

In an interview with Stephen Colbert, Malek says he went to do prerecording at Abbey Roads Studio, in London where he walked by an autographed photo of the entire band. “Freddie Mercury’s face is kind of just staring at me, telling me, ‘Don’t do this.’” He also says that he watched the remaining members of Queen view the first recordings of the film, another nerve wracking experience.

Production was delayed slightly since the original director, Bryan Singer, was fired from the position. However, Malek remains light-hearted considering the stress of the film.

The studio has been so confident about production time, since losing their director, including the release date being moved up from December to November. Fans also anticipate an online trailer for the film to be released soon, after one was shown at CinemaCon in Las Vegas.

The Other - King Tuff Settles Down with Trippy, Thoughtful New Album

Lollapalooza 2020: Who to Expect on the Lineup

Billboard Songs of the Summer Review

A “Twisted” Nahko And Medicine For The People