Memorial Day Weekend has come and gone yet again, and festival season has officially kicked off. I can’t speak for anyone else, but my time at Movement in Detroit was unreal. From meeting Grandma Techno to dancing in the rain with new friends, every moment of Movement was better than the one before it. Here are some of the highlights from the weekend. 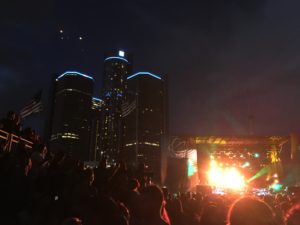 I’m not saying Richie Hawtin totally killed it, but his set was phenomenal and way out of this world. It was a solid hour and a half of intense techno beats that almost transported you to a different dimension. Things I heard leaving the set: “I think my soul left my body,” “Best Richie Hawtin set I’ve ever heard,” “I’m going to have to sit down for a while.”

Catch a few minutes of the set here.

Thank you Detroit, that was wild. Do it again next year?

Barclay Crenshaw’s evening set shook things up by incorporating several different genres other than techno. After nothing but straight techno for a few days, it was refreshing to hear something different in the form of the soulful R&B/hip-hop-infused set Barclay played. Testpilot comes in at a close second, however, due to technical difficulties and a torrential downpour, he was only able to play for less than half the time he was allotted. The small amount of time he did get to play had everyone dancing and moving, he definitely knew how to play for the crowd that was there. I just wish the weather would have cooperated so we could have seen what he could really do with a full time-slot.

I’ve never been to an old-school rave but I imagine the Underground stage puts off the same vibe as one. The stage was literally underground and the dance floor was sunk down, allowing people to stand on and dance on ledges surrounding the floor. The music bounced off the stone walls perfectly creating a heavy atmosphere. Since it’s underground, losing track of time and yourself is easy to do. It was a surreal experience to look up in every direction and see people dancing and moving.

Would it really be a Detroit festival if Griz and his All Good Records crew didn’t make an appearance? Another great set to complement the techno we’d been hearing all weekend.

Raver We Most Wanted to Dance With: Grandma Techno

Nobody I saw all weekend, and I mean nobody, was having as much fun or enjoying themselves as much as Grandma Techno. Whether she was dancing alone or surrounded by people dancing alongside her, the look of joy and happiness on her face was enough to make anyone forget about the bad weather that plagued the weekend.

As I was bouncing back and forth between Patrick Topping b2b Nathan Barrato and Soul Clap trying to stay out of the torrential downpour, a rainbow appeared in the sky. It was a very surreal and awesome moment and made dancing in the pouring rain totally worth it.

What’s been up with Keef lately?