Last weekend, some interesting events took place surrounding Jamie Jones’ event Paradise, which made its L.A. debut Saturday, May 13th. Both Skream and Doc Martin were removed from the lineup just days before the event. 6AM details the event and the reasoning behind Skream and Doc’s removal from the lineup in this brief post. 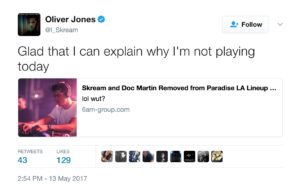 One instantly finds it odd that the city would schedule the event if there were an issue with the entertainment. What is it exactly about these two artists that makes them, in the eyes of city officials, “rave DJs”; while Jamie Jones, The Art Department, Nathan Barato, and Marques Wyatt (who was originally set to play B2B with Doc Martin) were apparently acceptable entertainers to take the stage at Levitt Pavilion. Nathan Barato, who was added to the lineup (assumedly in place of Skream) produced a track “Freaks of the Industry,” which is actually about deaths at music festivals, ironically enough.

There has been an anti-rave sentiment swirling about Los Angeles County for several years, pushing many major events into San Bernadino. Even so, the L.A. Times continues to enjoy vilifying music events, citing that deaths and hospitalizations have not decreased since leaving L.A. 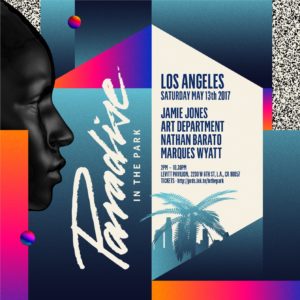 Banning raves from L.A. doesn’t actually solve any of the predicaments that arise from large music festivals; it has just made it someone else’s problem. Who actually thought it would solve anything? Probably no one, to be honest.

You know what actually could stop people from collapsing or dying at festivals at the current, disgusting rate? See below.

Drug use is such a taboo in American society. However, it has touched the lives of nearly all residents in some way or another. Providing reputable sources and forums for people to discuss drug safety and use is an underrated necessity. Sites such as Erowid and Shroomery are helpful. However, only so much trust should ever be placed in the random postings of strangers. On the internet, you will find plenty of conflicting information that may be more confusing than it is helpful.

This ties back into education, but providing people with the tools and knowledge to make prudent decisions is absolutely key to preventing overdoses and adverse effects.

Repeal or Reform the Rave Act

The verbiage of the Rave Act has made it particularly difficult for event producers to provide proper safety measures for attendees.

End the War on Drugs

There would be no need to test your drugs if they were manufactured in a regulated and FDA inspected environment. DUH.

Have you ever noticed that it’s usually the incredibly massive events (upwards of 50K attendees) where bad shit usually goes down? At elephantine scaled events, it is much harder for emergency personnel to wade through the crowd to assist a fallen attendee. Time is of the utmost importance in rescue and reviving. Maybe the size of the event should be under scrutiny, not the talent lineup.

If the powers that be could stop demonizing artists for the choices made by festival attendees, that would be just great. We see you and your red herring attack on “rave DJs”. Removing two accomplished DJs from the Paradise lineup didn’t save any lives; likely, it just pissed off a lot of people who had been excited to see them.

Check out our earlier article On the Dark Side of Festivals for a deeper look at this issue which has been the plague of the electronic music scene. Here at Red Roll, we in no way condone the use of illicit substances. However, if you are going to partake, please do so with the utmost care and discretion.

Led Zeppelin Is Not Reuniting This Year

There's a Mouse in the House

Your Guide to NCMF 2015 After Parties

Electric Forest Beyond The Music: Installations, Artists and More

Check out These Five Movies and Their Incredible Soundtracks