By now, you’ve no doubt heard about the disastrous Fyre Festival, Ja Rule’s scammy festival held in the Bahamas and promoted by supermodels. With ticket prices reportedly ranging from $4,000 up to $250,000 for a 12-person VIP experience, the festival was out-of-touch for most average festival-goers, with the majority of ticket-buyers being in a higher tax bracket than most of us will ever even dream of. Because of this, there was really no sympathy from the Internet, which truly delighted in the misfortune of those stranded in the Bahamas. Here are some of the best Tweets and posts about the fiasco: 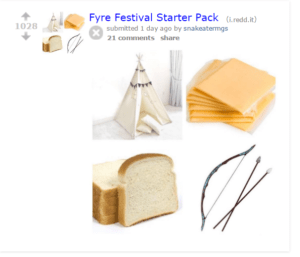 Finish your supper, there are starving 1 percenter kids at #fyrefestival

How many times has “Do you know who I am?” been screamed in the face of a very frustrated and confused Bahamian? #fyrefestival

Honestly #fyrefestival should be proud of its achievement as largest scale and most successful catfish of all time.

(Side note, “I truly apologize, as this is NOT MY FAULT… but I’m taking responsibility” is the only way I’m going to apologize for things from now on.)

Thankfully, there have been no reported deaths and those stranded were able to get flights back to Florida by Friday evening. However, organizers Ja Rule and Billy McFarland, (see his apology note here) have been hit with a $100 million class-action lawsuit by attorney Mark Geragos on behalf of his client, Daniel Jung. According to MSN.com, the suit claims as its causes of action: fraud, breach of contract, breach of covenant of good faith, and negligent misrepresentation and seeks a minimum of $100 million in damages.

While I do not envy the position the festival organizers are in right now, I would like to thank them for providing the whole world with a weekend’s worth of entertainment.

Summerfest to Reign Supreme over Lollapalooza?

Lollapalooza 2019: Everything You Need to Know