While Odesza has been quiet on the new music front over the past year, it seems the duo will finally be releasing something new. Their Spotify account was recently updated with a new playlist, seemingly in Morse Code, which has led fans to believe new music is on its way. The playlist, titled “…._/..___…..” was deciphered by Dancing Astronaut and translates to 4/25, which many fans have taken to mean April 25. 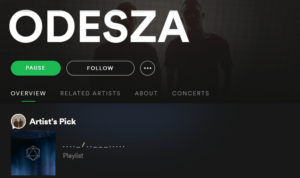 With festival season ramping up and Odesza’s very own Red Rock’s performance May 27-28, fans were left wondering whether new music would be released. Their sophomore album, In Return, was released in 2014, with a deluxe edition released in 2015. The album quickly catapulted them to fame and headliner-level status at festivals. As Odesza has gained popularity over the years and began headlining festivals all over the world, they have continued to sell out concerts, including their upcoming Red Rock’s show, but have been slow to release new music. However, over the past year or so they have been touring less in order to focus on creating new music.

Odesza had been keeping quiet regarding the playlist until early Monday morning when they posted a video to their Facebook page and Twitter account confirming the suspicions that it would contain new music.

The post gives no details as to how many songs can be expected or whether the release will be a full album but there’s no doubt the new Odesza tunes will be played all summer long at festivals and shows.

7 Tips for Getting in Shape for Festival Season