Towards the end of 2015 the long lived beast that is Emmure has come to a dramatic downfall. Four out of the five members that make up Emmure left the singer, Frankie Palmeri, to fend for himself while they start on their own project that they describe to Alternative Press as an “unnamed, unfronted project.”

The exact reasoning behind their resigning is unclear however Mark Davis, ex-Emmure bassist, was quoted during an interview with Alternative Press on the subject and it leaves quite a few questions. “The most important thing I have to say about all this is that there is no time or room for negativity in life,” he concludes. “If someone is bringing you down or holding you back from your full potential, it’s time to cut them out, no matter how much you may love them.” 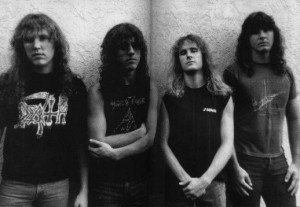 One can clearly speculate that Frankie Palmeri is the one to blame. Frankie has been called everything from a “disgusting human-being,” to a “demonic genius,” and has continued to push limits. Before the release of their latest album, “Eternal Enemies,” there was a song called, “Bring A Gun To School.” Obviously controversial, it was changed to “(untitled),” and since then the rest of the band has been reported that they were ready and hopeful for a positive, productive, and new start after Frankie’s vocal chords were injured during the Stronger Than Faith tour; the band report that their expectations fell short.

With Frankie Palmeri band-less, and the ex-Emmure musicians without a frontman, the suspense lingers throughout Emmure fans and the metal community alike. Will Frankie sink beneath the waves of popularity or will his “demonic genius” find a way to rise above this abandonment? One can only wait….and see.

Gonzo Journalist. Love advocate. Music addict. Memory maker. Chicago is my birthplace but this world is home. I'm consciously and unconsciously evolving and I'm enjoying every minute of it.

Concert Life: With Friends or Alone?

Vic Mensa sounds as confused as ever on “Hooligans”

Watch out for Hayley Williams in 2020!