The reviews are in, and what a month of Apple Music has taught users, is that all that glitters is not gold. Taylor Swift’s open letter toward Apple seemed to mark a change that caused many artists to wait with bated breath as Apple promised that Apple Music’s three month free trial will pay artists for the songs that are streamed.  Along with this promise, Apple Music introduced a new feature known as Beats 1 – a 24-hour radio station DJ’d by some of the music business’s hottest names. Apple Music would also be home to many artists such as Swift who have explicitly taken their songs off of Spotify. 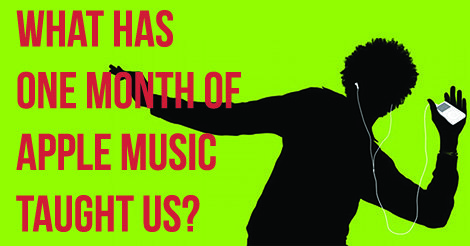 Good in Theory, Bad in…

However, despite all the amazing features, many listeners are unhappy. Even if Siri can now recommend a scarily accurate song selection, Apple Music has a lot of issues and bugs that have made many users quit their three month subscription within in a week.
Above all these complaints are that Apple has lost its golden touch when it came to user-friendly software. Doing previously easy tasks such as adding a song to the Up Next playlist has become a struggle and using Apple Music on multiple devices is a nightmare compared to its easier to use incarnation iTunes. For weeks on end, Apple support forums were flooded with complaints such as playlist errors, duplicated song titles, playlist disappearing, and mislabeled titles. Whether or not Apple plans on addressing these issues is yet to be said.

Apple has yet to make a statement about any future updates to address the issues with Apple Music. Instead, it seems to be focusing its attention on the widely successful Beats 1 radio stations. Among the difficulties that Apple Music presents, Beats 1 shines as the beacon of hope. Apple has expanded its lineup of Beats radio stations. Apple has even been busy launching a possible Beats 2 station in Australia and Asia.
Beats 1 is proving that radio is not dead in the slightest. The draw of Beats 1 is that fact that it provides the communal listening experienced offered by traditional radio. Billboard examined 155 tweets on July 6th to find that the reception for Beats 1 was largely positive. According to their research: “83.9 percent of the tweets expressed positive sentiment, usually about the host, a song or, most often, the station itself.” Fortune even commented, “Beats 1 is killing it on Twitter.” Beats 1 has even got the attention of Labels who are pleased to see the success that the radio stations are having, but hesitate to take any action until the three month Apple Music trail period ends in October. However, with its stand alone success, Beats 1 may become its own separate entity apart from Apple Music.

Apple Music is an odd case. On the one hand, it offers a sub-par music streaming service riddled with issues that falter against dominating services such as Spotify. But on the other hand, it offers a classic DJ run radio service backed by a number of big name artists such as Eminem, Dr. Dre, and Taylor Swift. With results such as these, Apple Music offers a mixed bag of successes and failures. At the very least it is two more months to try Apple Music for free.

Avicii’s Legacy Continues to Reign with His New Song “SOS”

Lollapalooza 2020: Who to Expect on the Lineup

Buckle In, Mitski’s Newest Song Takes You on an Evil Ride