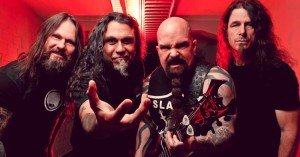 Legendary thrash metal band Slayer has announced that their brand new album will be called Repentless, and that it will be released in September.
A follow up from their 2009 release, World Painted Blood, the band will be releasing their newest album on September 11 of this year, which will also be the fourteenth anniversary of their album God Hates Us All. It will also be their first album without founding member Jeff Hanneman, who passed away in 2013. We’ve heard a few songs to be featured on the album such as ‘When The Stillness Comes‘ and a new version of ‘Implode,’ which was originally recorded in 2014 and released for free. Check out a teaser from the band below, and tell us what you think in the comments.

3 Reasons You Should Attend The State Champs Spring Tour