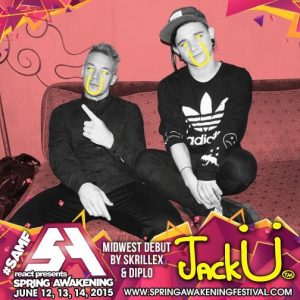 The duo DJ set featuring Skrillex and Diplo, better known as Jack Ü, has been announced that they will be headlining Spring Awakening Music Festival which takes place at Soldier Field in Chicago on June 12th, 13th, and 14th. This will be the first time the duo has played together in Midwest. Jack Ü was formed in 2013, with their first debut at the Mad Decent Block Party, and has since toured the nation.

Skrillex and Diplo’s collaborative project has been filled with surprises, as two of the biggest stars in the dance music world surprise-dropped their debut album last week during a 24-hour marathon party in LA. Dubbed Skrillex and Diplo Present Jack Ü, the umlaut-happy, features-heavy album sports appearances by Justin Bieber, 2 Chains, Missy Elliott, AlunaGeorge, and more. The LP is now available on iTunes and for streaming onSoundcloud.

Are you excited for Jack Jack Ü’s Chicago debut? Let us know in the comments below!

Firsthand Account of Forbidden Kingdom Festival (You Really Missed Out)

The Merchandise Era in Music