Rumors have been circulating around that Chicago may be the home of the popular Electric Daisy Carnival, a 3 day Electronic Dance Music festival held in various locations around the world. EDC 2013 was held in Joliet at the Chicagoland Speedway, however it did not return in 2014 due to revenue conflicts with the venue.

But hopes are high for an EDC Chicago 2015. Rumor has it that Insomniac, the creators of EDC, invested into the renovation of Northerly Island, a 91 acre peninsula that juts into Lake Michigan. The southern 40 acres of the island are under construction and is not accessible to the public, and the renovations may just be all part of Insomniac’s plan for another year here in Chicago.

Pasquale Rotella, the CEO of Insomniac, released a statement in his Reddit AMA that said:

EDC Chicago didn’t happen this year (2014) because we didn’t have a venue. We lost our ass financially with EDC Chicago 2013 being so far out. I’m all for investing and building up something to fit our needs, but this was such a loss that we couldn’t afford to do it again. We are looking for a venue that’s closer to the city, or further away but more affordable. 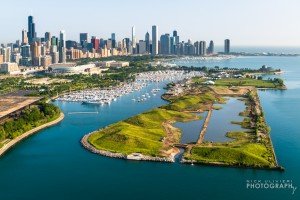 The concert amphitheater on the island, FirstMerit Bank Pavilion is operated by Live Nation Entertainment, a partner of Insomniac Events.  The amphitheater features a 30,000 person capacity. EDC Joliet also had a capacity of 30,000, however capacity was never reached throughout the festival in 2013. Chicago’s Park District’s website says the following about the ampitheater:

The 2013 season brought a variety of improvements and expansions to this popular lakefront facility, including an upgraded stage, expanded state-of-the-art sound and lights, new seating and more grassy space throughout the venue. The newly redeveloped lawn now allows for flexible capacity up to 30,000 patrons while still offering sweeping panoramic views of Chicago’s lakefront.

There is plenty of other space around the island to feature multiple stages, along with the already established camping areas, however would most likely not feature on-site camping due to space restrictions. All the signs seem to be pointing to Northerly Island being a great location for EDC to take over next year. Cross your fingers. 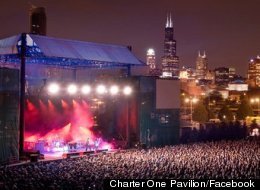 Do you think this could be the new home to EDC? Let us know what you think in the comments!

Skrillex Announces Fall Tour Around the US

Out With The Old, In With New Tunes